I love Coconut Macaroons, so when I spotted this recipe in Anna Jones’ ‘A new way to eat’ book I had to have a go, but I needed to fiddle with it a bit. I needed to pick my own fruit and use fewer and slightly different sugars. I used coconut sugar, which is soft and brown, so my middle bit wasn’t crisp and white like hers – here is my edited version of Anna’s tart..

I blitzed this together in a food processor until soft and crumbly, pressed it into a 28cm springform, lined cake tin and baked for 10 minutes at 180C fan and then left it to cool. 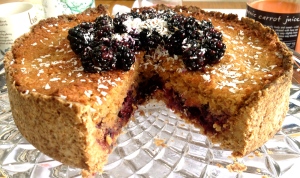 When the base was cool I covered it with blackberries. I whisked together the egg whites and sugar – although, possibly due to the sugar, they didn’t whip into airy peaks, folded in the coconut and spread it over the berries and baked for 15 minutes at 180C fan until golden on top. I topped with a handful of brambles and a sprinkle of dessicated coconut.

I also boiled the rest of the brambles we’d picked with the juice of one orange and a spoonful of coconut sugar until it was reduced and a bit jammy and then I mixed in 1/3 of a tin of coconut milk to make a little bramble sauce.

White and creamy is also required when eating pie, so I mixed 125g of sour cream with 125g of natural yoghurt and served that in a little jug too.

This site uses Akismet to reduce spam. Learn how your comment data is processed.